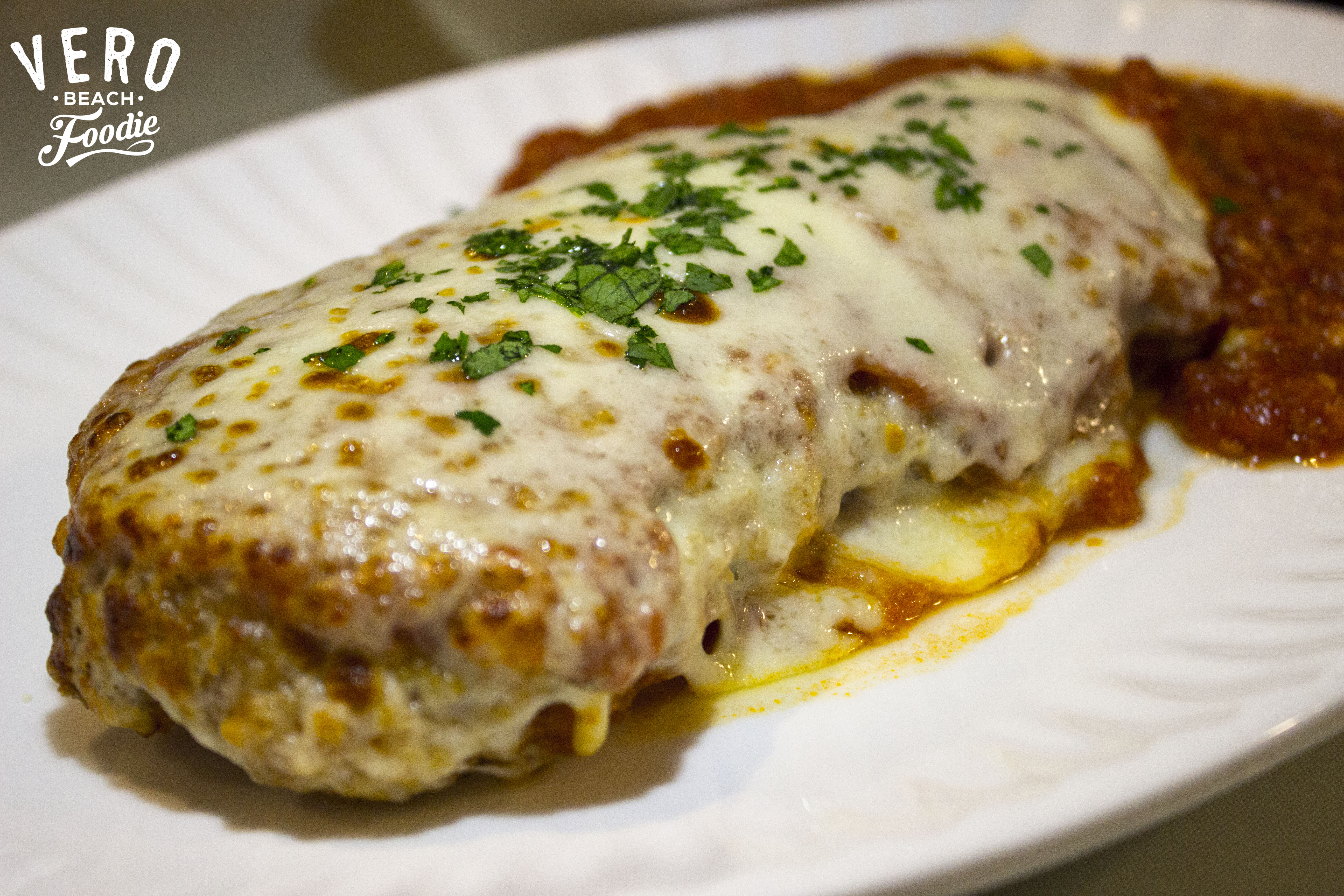 For my next tasting experience, I head back to Downtown Vero once again and to The Original Mama Mia’s Kitchen!  It seems like just yesterday that the VB American Bar & Grill was there, and in the blink of an eye, the sign changed and the new one for this place went up.  Once the word got out about Mama Mia’s, the questions started flooding in.  Is this the same place that was open in Sebastian many years ago?  I’m happy to report that the family recipes and lineage are the same, just with new ownership.  For the full story of Mama Mia’s history, be sure to check out the back of the menu when you dine with them.

Located on 14th Avenue in the corner between Main Street Jewelers and Baci Trattoria is Vero’s newest Italian restaurant.  Subtle changes were done to the interior due to the quick change over, but they did add a lattice wall with green vine through it to divide the room, most of the tables and booths were used with a few changes to the configuration, and they added white tablecloths with glass tops on all the tables.  The bar and TV’s that were there previously have remained.  They still share the patio with Baci, but they don’t open until well after Baci has closed, so there is no overlap.  Most of the businesses in the plaza are also closed or closing shortly after Mama Mia’s opens, so most of the parking lot will be available to their customers. 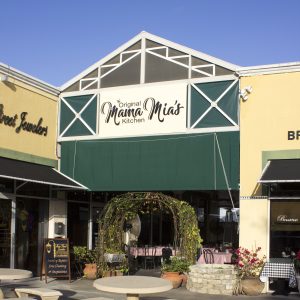 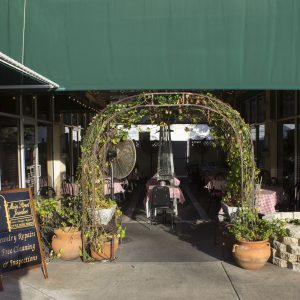 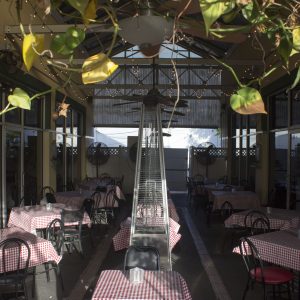 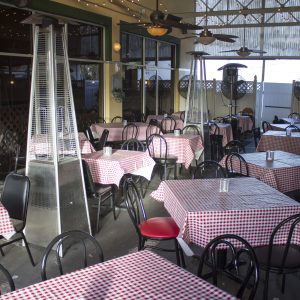 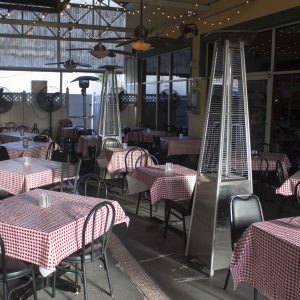 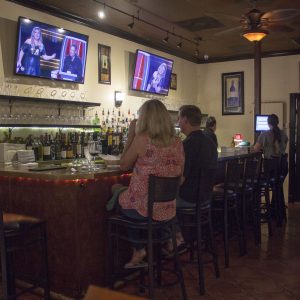 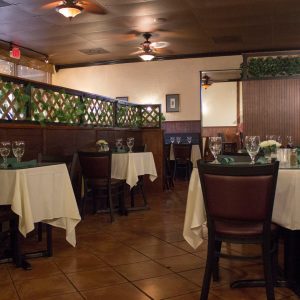 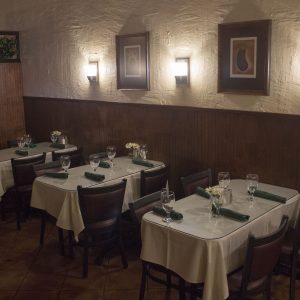 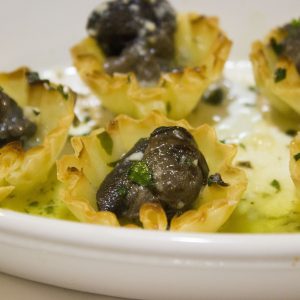 Close up of Escargot 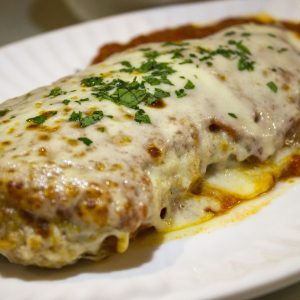 Close up of Veal Parm 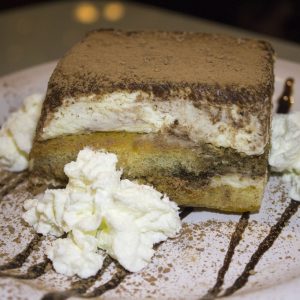 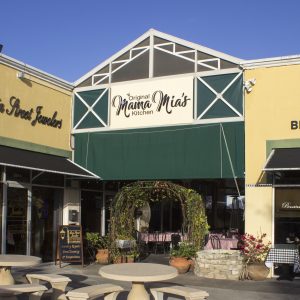 Now let’s dive right in and see what this place has to offer and what I had to eat! Escargot in Phyllo Cup – ($8.95) – I have fond memories of a dish that used to be offered at the EPCOT Food & Wine Festival in the France pavilion that this one reminded me of, so I had to try it.  The escargot was placed in the phyllo cups, topped with a garlic butter sauce, then baked until golden brown.  The escargot was very tender and almost disintegrated with the flakiness of the phyllo cup when I took a bite.  The garlic butter sauce was just enough to coat and not overwhelm the dish. Mozzarella en Carozza – ($8.95) – With such a fancy sounding name in Italian, I was not sure what to expect since it translates in English to just a mozzarella cheese sandwich.  Fresh mozzarella cheese is sandwiched between two slices of bread and the “sandwich” is then coated with seasoned flour, dipped in an egg wash and fried until golden brown.  Marinara sauce can be served over the top or alongside.  The outside of the bread had a light crunch, while the inside was soft and gooey from the cheese.  The marinara has just the right amount of sweet verses tartness from the tomatoes.  It was so good! Twisted Caesar Salad – ($7.95) – I was curious as to what makes it “twisted”, so we ordered it to find out.  From the description, it’s a typical Caesar salad with the addition of fresh mushrooms and bacon.  The lettuce was nice and crisp and was not overdressed.  The addition of the mushrooms and bacon added some additional texture, but only a minimal smokiness from the bacon. Momma Mia Fiesta Platter – ($18.95) – Since this was our first time here, I thought that ordering the sampler platter would be a good idea to try several of the dishes they offer at one time.  This platter includes an eggplant rolatini, ravioli, meatball, sausage, and penne.  All were topped with their house-made marinara sauce.  The meatball, made with only ground beef, was seasoned nicely and quite tender.  The sausage was quite bold in flavor but just a little too “herby” for my tastes.  The ravioli had a generous amount of filling and was cooked al dente.  The true star on this plate was the eggplant rolatini.  I’ve tried several around town at other restaurants, but this one steals the show.  The eggplant was roasted, then rolled up with seasoned ricotta cheese, topped with mozzarella, and baked until golden brown.  It was very tender and easy to cut through with a fork, yet still had a little chew to it which was nice.  Flavor was spot on and it was a table favorite! Veal Parmigiana – ($19.95) – As one of my all-time favorite Italian dishes, I was happy to see this on the menu.  Portion size is HUGE!  I would compare this to the size of a chicken breast you get at Fresh Market.  Being as thick as it was, I really expected it to be a bit tough as I had read in a previous review by a local newspaper. I had preconceived expectations, but to my surprise, it was anything but.  It was perfectly seasoned and very tender.  The sauce served on the side was their meat sauce and it was delicious.  A side of spaghetti with marinara was served alongside. Tiramisu – ($5.95) – While not necessarily one of my favorite Italian desserts, it is one that we have not had very often during my reviews, so we decided to order it.  Portion size was very generous and could easily be shared, it also had just the right amount of sweetness after such a savory meal.  The ladyfingers were perfectly tender and did not have much alcohol flavor which was nice because that is one of the reasons why this is not a favorite of mine.  It was a nice way to round out our Italian meal!

I had heard they had a rough start when they first opened and their review from 32963 confirmed some of what I had heard.  I’m happy to report that my experience was much better than expected for a place that had only been open for a short while.  I usually like to let the “new” wear off a bit and let them get in their groove, but I was anxious to see what all the hype was about.  The food was quite good and very fresh.  You can tell most, if not everything is house-made.  The atmosphere was somewhat like the previous tenant since some of it was reused, but they did add some nice touches to make it more of a fine dining establishment.  If you love Italian food as much as I do, then I suggest you go give these guys a try, I’m sure you won’t be disappointed!