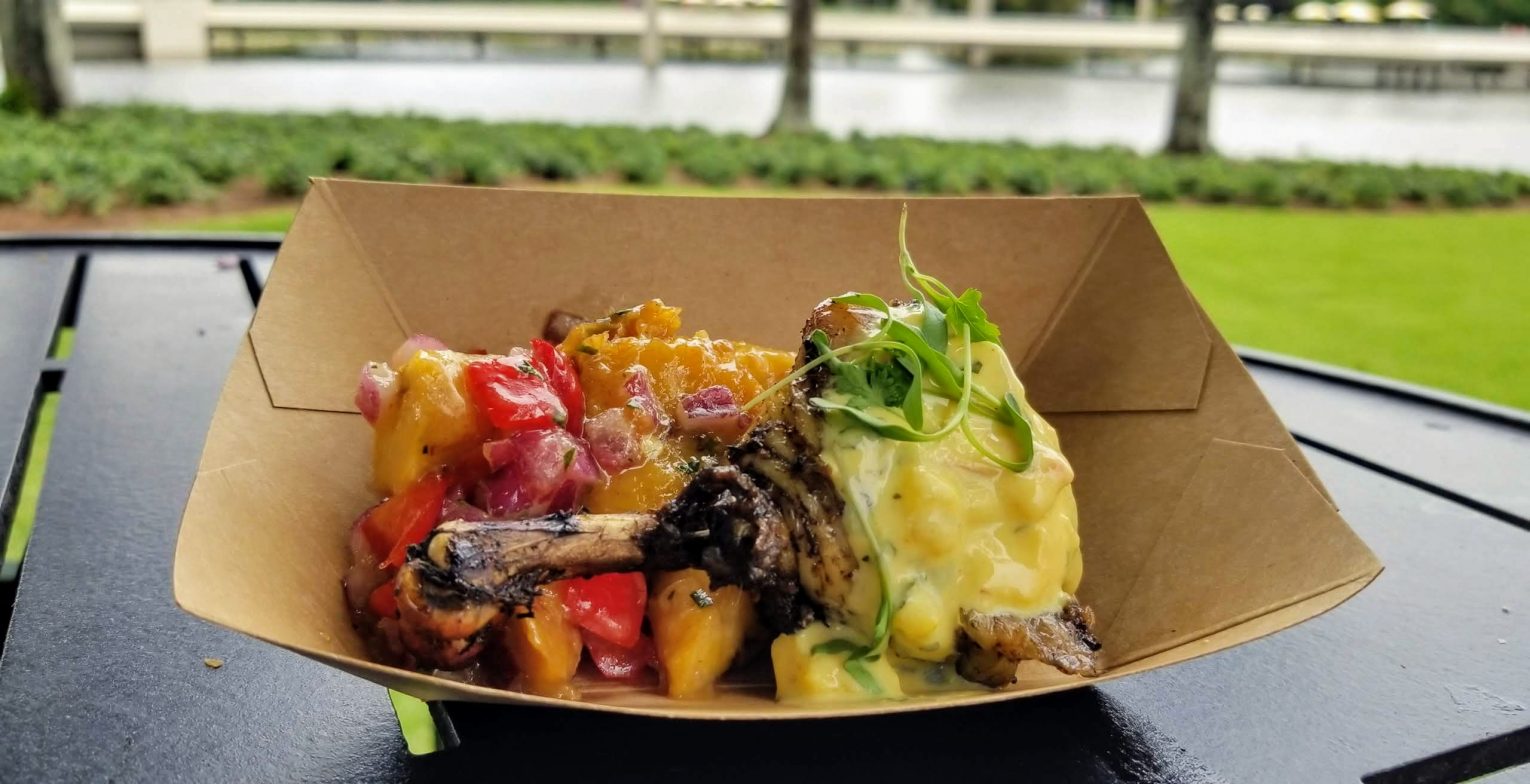 It’s that time of year again as I head back to the EPCOT Food & Wine Festival and try all the different dishes as we take our “Trip around the World”.  Disney does a fantastic job in keeping with the authenticity of the dishes yet making them palatable for most of the general public that are not that adventurous of eaters.  A few of the same options that I reviewed last year were back again, but I tried to work in some new ones too.  I always try my top three from last year to see if they were as good, if not better.  Unfortunately, only two of my top three were back again.  Were they as good as last year?  Did they keep their same positions on my list?  Keep reading to find out!

Below I will not feature everything I ate, just my “Top ATE” dishes from 2018, so let’s jump right in and see what I had to eat! #8 – Australia – Grilled Sweet and Spicy Bush Berry Shrimp ($5.50) – Coming in at number eight on my list is this new dish at this year’s festival.  Five grilled shrimps were served over a sauté of pineapple, pepper, onion, and snap peas.  The dish was quite colorful yet lacked the punch I hoped it would have.  While it was sweet, the heat was way too subtle for my taste.  Textural wise, it needed something different because almost every element was crunchy. #7 – Brazil – Seafood Stew ($5.25) – Next up at number seven is also a new dish for 2018!  It’s made with scallops, shrimp, white fish, and served with a coconut lime sauce served over steamed white rice.  This dish had a nice amount of seafood but was a bit of a fooler.  The base of the dish is mostly rice with only about a half a cup of stew over the top.  There was a fair amount of seafood in the stew, but I would have liked a little more of it and a little less rice.  The broth was not a rich as I had hoped it would be, but the flavor was quite good.  It reminded me of a lighter clam chowder. #6 – New Zealand – Lamb Meatball ($5.50) – Falling from the number three spot in both 2016 & 2017 was one of my favorites.  While you can see the lamb meatball this year, the lack of the spicy tomato chutney was disappointing.  This was what really made the dish for me and added a lot of additional flavors.  The meatball was still moist and seasoned well, but the bread bowl was a bit dry and needed the extra chutney to help with that. #5 – Flavors from Fire – Smoked Corned Beef with Warm Crispy Potatoes ($5.00) – Continuing with the theme of trying the newest items this year, this dish sounded interesting.  Chopped smoked corned beef was served over warm crispy potato chips with pickled onions and topped with a blonde ale beer fondue cheese sauce.  The chips were nice and crispy and were seasoned well.  The corned beef had good flavor, not overly salty or smoky, but there just was not enough of it.  The beer cheese fondue was smooth, creamy, and had a slight smokiness to it.  If you add the right spices and smoke corned beef, it becomes pastrami.  I would really like to see them develop this dish further for next year and call it Pastrami Nachos.  It would be on my list of must tries again next year. #4 – Canada – “Le Cellier” Wild Mushroom Beef Filet Mignon ($8.00) – Dropping down from my number one spot the past two years is this dish.  I’m a little bit disappointed since this one has been consistently great each time we tried it.  Don’t get me wrong, it was still good, just not up to previous years standards.  The cook on the steak was more well done than medium.  This may be due to the cut of filet and the thickness of it.  After reviewing my previous year’s photos, this one seems quite thin in comparison, so that might be part of the problem.  The truffle butter sauce and the mushrooms were still exceptional. #3 – Flavors from Fire – Dark Chocolate Mousse ($3.75) – Not many desserts this year intrigued me as much as this one, so I decided to try it.  While I did not think it looked that appealing, the ingredient list is what drew me in.  It has cayenne pepper and chili powder in it.  The outside looked like a dense sponge cake, but inside it was soft and mousse-like.  The bottom layer was chocolate pearls.  At first bite, you taste the creamy chocolate, the crunch of the chocolate pearls, then a few seconds later, the heat from the cayenne pepper kicks in and hits you in the back of the throat.  It was not overpowering, it just surprises you because it’s not something you would expect from a dessert.  The mango did not really make sense, other than for those that don’t like the heat of the pepper to cool it down.  This is one dessert I will be trying again if they continue to offer it at future festivals. #2 – Coastal Eats – Seared Scallops – ($6.00) – Scallops are one of, if not my favorite seafood items, so I had to try this one.  The scallops had a nice sear on them and were served with a roasted corn & butterbean succotash and served with a chili-Chipotle butter sauce.  For $6.00, this was a very generous portion of large scallops.  They were perfectly cooked, still a little under in the middle and were nicely seasoned.  The butterbean and corn succotash had good flavor and the beans were nice and tender. #1 – Islands of the Caribbean – Jerk Spiced Chicken Lollipop – ($5.50) – I LOVE BOLD island flavors. They are spicy, sweet, tangy, earthy, and very fresh, and this dish had all of that.  It was served with a roasted plantain salad and a mango chutney yogurt sauce.  The chicken drum was perfectly cooked and had just the right amount of jerk seasoning and heat.  The plantain salad had a lot going on and was just delicious!  Disney usually plays it somewhat safe to please the average palate, so I was happy to see that they stepped outside their comfort zone and brought this wonderful dish to the festival!

How much did all this fun cost us you ask?  We were surprised when we got home and tallied up all our receipts.  For everything that you saw in this post with two people sharing each dish, our total was only $44.50!  Last year’s total was $68.50, so we ended up spending $24.00 less this year.  There were not enough new dishes to choose from and I wanted to try as many new as possible, with only repeating my top three.  Our total for the day, with a tank of gas ($30.00) and parking included on my wife’s annual pass was just $74.50!  I originally was not planning on going again this year, since the dishes had not changed that drastically from last year, but Disney contacted me and offered two press passes to get into the park, so I could write about it again.  If they offer them again next year, then I’ll just have to take them up on their offer and eat my way around the world again!

The 2015 EPCOT Food and Wine Festival

The 2016 EPCOT Food and Wine Festival

The 2017 EPCOT Food and Wine Festival

Follow Me
Thomas Miller
Thomas Miller, aka "The Food Guy" is big on organic everything and very particular about his butter. He has reviewed over 150+ local restaurants in the last 4 years and is invited by Disney to review the EPCOT International Food & Wine Festival every year. His food photos are devoured by 10's of thousands monthly on VeroVine.com and as a Google Maps Local Guide, his photos have been viewed over 16 million+ times. His foodie tribe is over 10,000+ people right here in Vero Beach and his VIP Foodie Dining Experiences are some of the Top Culinary experiences in Indian River County and beyond.
Follow Me
Latest posts by Thomas Miller (see all)
Subscribe
0 Comments
Inline Feedbacks
View all comments