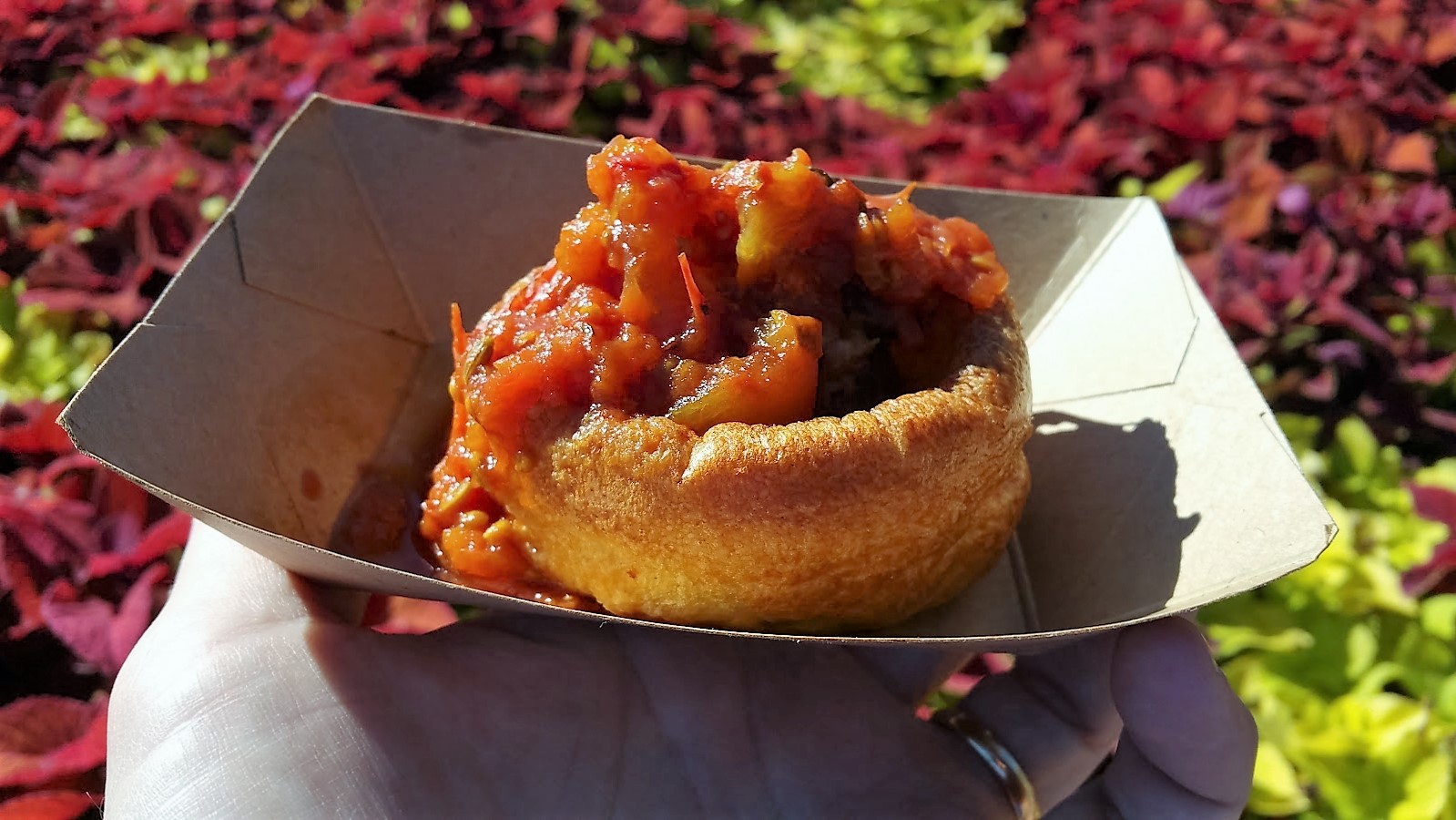 It’s that time of year again as I head back to the 2016 EPCOT Food & Wine Festival and try all of the different dishes as we take our “trip around the world”.  Disney does a really great job in keeping with the authenticity of the dishes, yet making them palatable for the majority of the public that are not that adventurous of eaters.  I did notice that some of the more “exotic” items that were on the menu last year were not here this year.  I’m assuming that they did not sell as well as they had hoped.  A lot of the same options that I reviewed last year were back again, so I tried to sample some new ones, while still trying the standout dishes from last year to see if they are still as good, if not better.  My article will be a little bit different this year,  I will not feature everything that we ate, and just focus on my “Top ATE” dishes this year.

Without further ado, let’s jump right in and see what I had to eat! #8 – Germany – Schinkennudeln – ($3.75) – Coming in at number eight is a Pasta Gratin with Ham and Cheese.  The dish was like a hash brown casserole that had diced ham and what tasted like gruyere cheese in it.  If there was actual pasta in it, the texture seemed more like the shredded potatoes than  pasta to me.  Flavor was subtle, and I think it’s one of those dishes that would taste better the next day after the flavors have time to fully come together after being refrigerated.  Overall not bad, just not good enough to make it to the top of my list. #7 – Mexico – Barbacoa Enchilada – ($5.50) – Next up at number seven is this Barbacoa Enchilada from the Mexico booth.  It’s made with a corn tortilla, filled with beef barbacoa,  topped with Oaxaca mole sauce, and garnished with fried onions.  The corn tortilla was soft and had good flavor.  The beef barbacoa was seasoned well, the mole sauce was full of flavor and had just a tiny bit of heat to it.  I was a bit confused by the fried onions on top, as this does not seem traditional to me, but it did give a nice texture variation to the dish. #6 – Ireland – Warm Chocolate Pudding – ($3.75) – The first dessert to make my list is this wonderful chocolate pudding.  The pudding is not what you would expect  when you think of pudding, at least not for me.  It’s firmer than you think it would be, yet quite soft at the same time.  It has a cake-like texture, yet somewhat like a firm set pudding.  The custard sauce over the top tasted like Bailey’s Irish Cream liqueur and was lightly sweetened.  The pudding was warm and had a wonderfully rich dark chocolate flavor. #5 – China – Beijing Roasted Duck – ($6.50) – Duck is one of my favorite meats, so it’s no surprise that this made it to my number 5 favorite dish this year.  It’s made with roasted duck and served in a steamed bun with hoisin sauce.  The duck was perfectly cooked and the skin was crispy.  The steamed bun was soft and very fresh.  The hoisin sauce was sweeter than I expected it to be.  At first, I actually thought it was plum sauce which is more traditional with roasted duck.  It was garnished with red onion and chives.  It was fabulous! #4 – Belgium – Belgian Waffle – ($3.75) – We had this dish last year and it was one of our stand-out favorites, so we definitely had to try it again.  It’s a traditional Belgian waffle served with berry compote and whipped cream on top.  The waffle itself was crispy, but I do wish that it had a tiny bit more malt flavor to take it over the top.  The berry compote was both sweet and tart at the same time and was delicious! #3 – New Zealand – Lamb Meatball – ($5.25) – I was a surprised at first when I received the dish pictured above, especially when I was expecting a meatball and got this.  I never actually saw the meatball, I just assumed it was in there somewhere.  It’s served in a bread bowl with a spicy tomato chutney served over the top.  I picked up the entire bread bowl and took a bite.  It was delicious!  The bread was soft and very fresh, yet held together under the meatball and the chutney very well.  The meatball was perfectly cooked and juicy, and the tomato chutney was sweet with a tiny bit of heat on the back end.

#2 – Brazil – Escondidinho de Carne – ($5.00) – When I received this dish, I was really disappointed in the presentation.  I was hoping that it would taste better than it looked and thankfully it was way better than I expected it to be.   It’s also known as “Little Hidden One” and is a layered meat pie with mashed yucca.  In the bottom there is seasoned ground beef with mashed yucca on top, then it’s baked to a golden brown .  I would describe it as a Caribbean Sheppard’s Pie.  The seasoned ground beef tasted like the filling in an empanada, and the mashed yucca was smooth and creamy.  My wife and I were fighting over the last few bites of it, it was that good! #1 – Canada – “Le Cellier” Wild Mushroom Beef Filet Mignon – ($7.75) – Once again the Canadian booth continues to impress me with their offerings, and moving up from my number two spot on last year’s review is this fabulous wild mushroom filet mignon!   The filet was cooked to a perfect medium once again and is served with sautéed mushrooms in a truffle-butter sauce.  The cut of beef was extremely tender, the mushrooms were perfectly cooked, and the truffle-butter sauce was full of flavor!  An outstanding dish and well deserving of the number one spot on my “Top ATE” list!

How much did all of this fun cost us you ask?  We were really surprised when we got home and totaled up all of our receipts.  For everything that you saw in this post, and two people sharing each dish, our total was only $63.25!  Last year’s total was $64.25, so we ended up saving $1.00 this year!  Not too bad for all that we had.  Our total for the day, with a tank of gas and parking included on my wife’s annual pass, was just a little over $85.00!  Next year I will check the menu’s and see if they have made a dramatic enough of a change for me to go back and do this again, otherwise I will just wait a few years and try again when they have some newer dishes to offer. 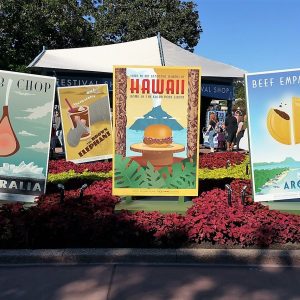 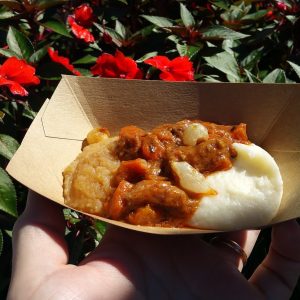 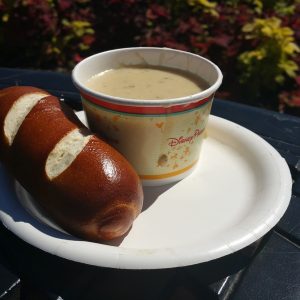 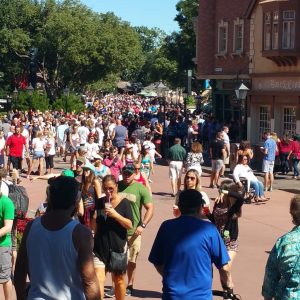 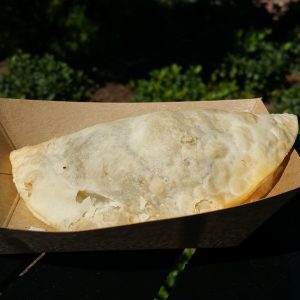 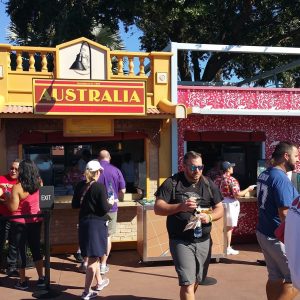 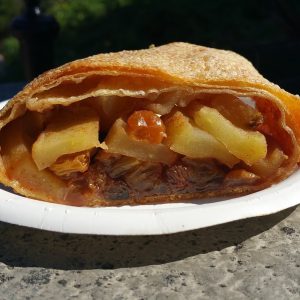 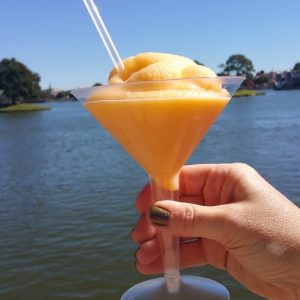