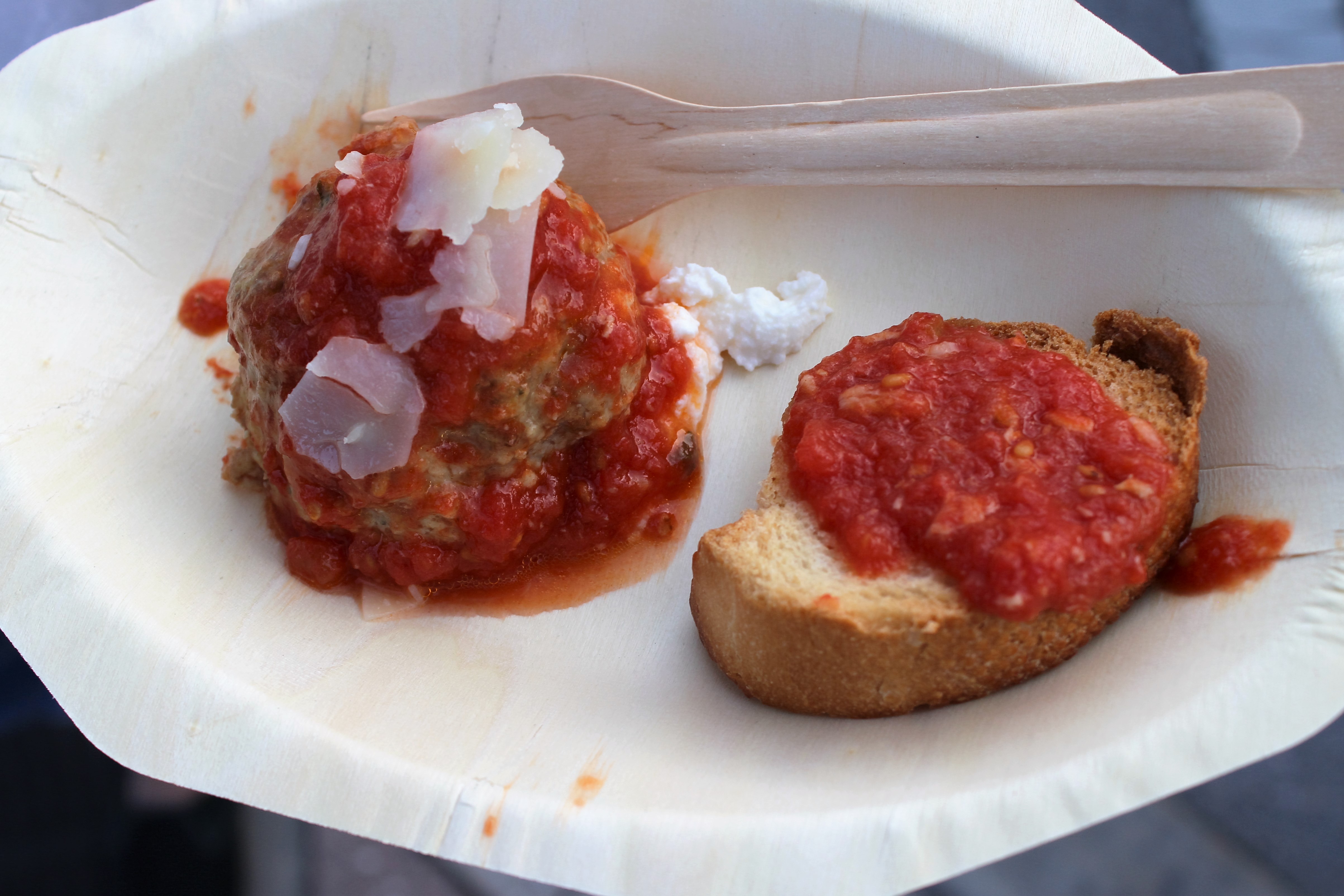 OK, here we go with part 2 of my review of the Taste of Vero Event!  Which dish came out on top for me?  Be sure to check out my TOP ATE dishes from this event at the end of the article! Chive – As an avid BBQ fan, ribs are one of my favorites, so  I was looking forward to trying their offering.  This is a deep fried spare rib with a maple soy glaze & fresh garlic.  The rib was tender, but not fall off the bone tender.   I could definitely tasted the maple, but the garlic must have been more subtle since I did not taste any in the sample that I had. Wild Thyme Catering – While it was a small sampling, it was interesting to say the least.  It was a breaded chicken satay with a thai peanut sauce.  The chicken was perfectly cooked, but the outer coating was not as crunchy as I had hoped it would be.  The thai peanut sauce was good, but could have used a little bit more heat to it. Baci Trattoria – They were serving a Meatball Gondola as their main course, and a hibiscus flower infused limoncello tiramisu in a small cup for dessert.  The meatball was perfectly cooked and seasoned to perfection.  It had a simple tomato sauce over the top with shaved parmesan cheese.   The dessert was the star of their offering.  It was tangy, creamy, and oh so delicious!  I only wish they gave out a larger portion, because two bites and it was gone! Heaton’s Reef – Now this looks interesting!  What could be inside?  This is a Bacon, Cheddar, and Grits Croquette with a beer cheese sauce.  The outside was crunchy, and the inside was soft and fluffy.  It had cheese and bacon inside, plus the beer cheese sauce on the plate, with a sprinkling of bacon and chopped chives to garnish.  Another one of my wife’s favorites of the night! Cobalt – It’s an Ahi Tuna Crisp with cucumber, scallions, and its topped off with an Avocado crema.  This dish has a lot of components that I like and was fantastic!  The wonton was crispy, the tuna was slightly chilled and seasoned well, the cucumber was crunchy, and the avocado crema on top was smooth and creamy.  A very nice offering from Cobalt! Amalfi Grill – I got to them later in the evening and they ended up running out of the roasted porcini risotto they were offering, so I did not get a chance to taste that, but what I did taste was really good.  In the picture above is what they had left.  Tuscan short ribs and Pollo Cavatappi Amalfi pasta.  The short ribs were slow roasted and very tender.  The sauce they were in had a great depth of flavor, the kind you get from slow cooking them for a long time.  The pasta had a lot going on with it.  It had rosemary roasted chicken, sweet Italian sausage, spinach, portabella mushrooms tossed in a white truffle cream sauce topped with parmesan reggiano cheese.  While it was good, I was unable to taste all of the components in it.  Perhaps we just did not get everything in the sample we were given, but my expectations for this dish were higher with all that it had going on. Blue Agave – I’ve had the pleasure of eating at Blue Agave one time previous to this event and the meal was awesome, so I was definitely looking forward to trying what they had to offer.  Here we have a Cabeza (Beef Cheek) taco with a carrot slaw and a cucumber watermelon margarita sample.  The tortilla was made from corn and held together well, the cabeza was very tender and flavorful, and the carrot slaw was tangy, sweet, and crunchy!  The combination was definitely a winner, as they were awarded the top honor of the night with the people’s choice award for best dish.  The margarita was quite strong and was definitely a crowd favorite that night. Osceola Bistro – I got in line to try their dishes fairly early in the evening, but the line was long and not moving.  It appeared as if they were not ready for service at the start of the event, so we decided to move on and come back to them.  This was the last booth we visited for the evening and they were out of everything except for the wings.  The wing is the Bireley Family Favorite Chicken Wings and were lightly breaded and tossed in a spicy garlic, ginger, local honey, and other secret spices.  The wing was hot and freshly cooked and I loved the sauce.  The sauce was tangy and a bit spicy.  The wing was perfectly cooked, still moist and tender inside.  I only wish I could have tasted the other dishes they were offering, as they sounded interesting.

WOW, there were definitely a TON of great dishes offered at this year’s Taste of Vero event.  Which dishes made my TOP ATE?  Check out my list below:

And my #1 favorite from the night! From what I heard about last year’s event, I certainly was not disappointed.  Over 20 restaurants came together to let you sample what they have to offer, and to support a great cause too.  The H.A.L.O  No Kill Animal Shelter is definitely a worthy charity, and the community always comes out in droves to support them.  Tickets for this event sold out in less than 2 days!  If you would like to attend next year, make sure you follow the Taste of Vero event on Facebook to keep up to date on when the tickets go on sale, and I’d suggest you purchase them the day they go on sale next year!

After tasting so many different dishes that evening, I was FULL, but very satisfied!  ToV is a great way to get a sample taste from many different restaurants you may not have visited yet, but have been meaning to.  If you attended the ToV, how did my favorites stack up with yours?

Sound off in the comments below and let me know your thoughts on my selections.