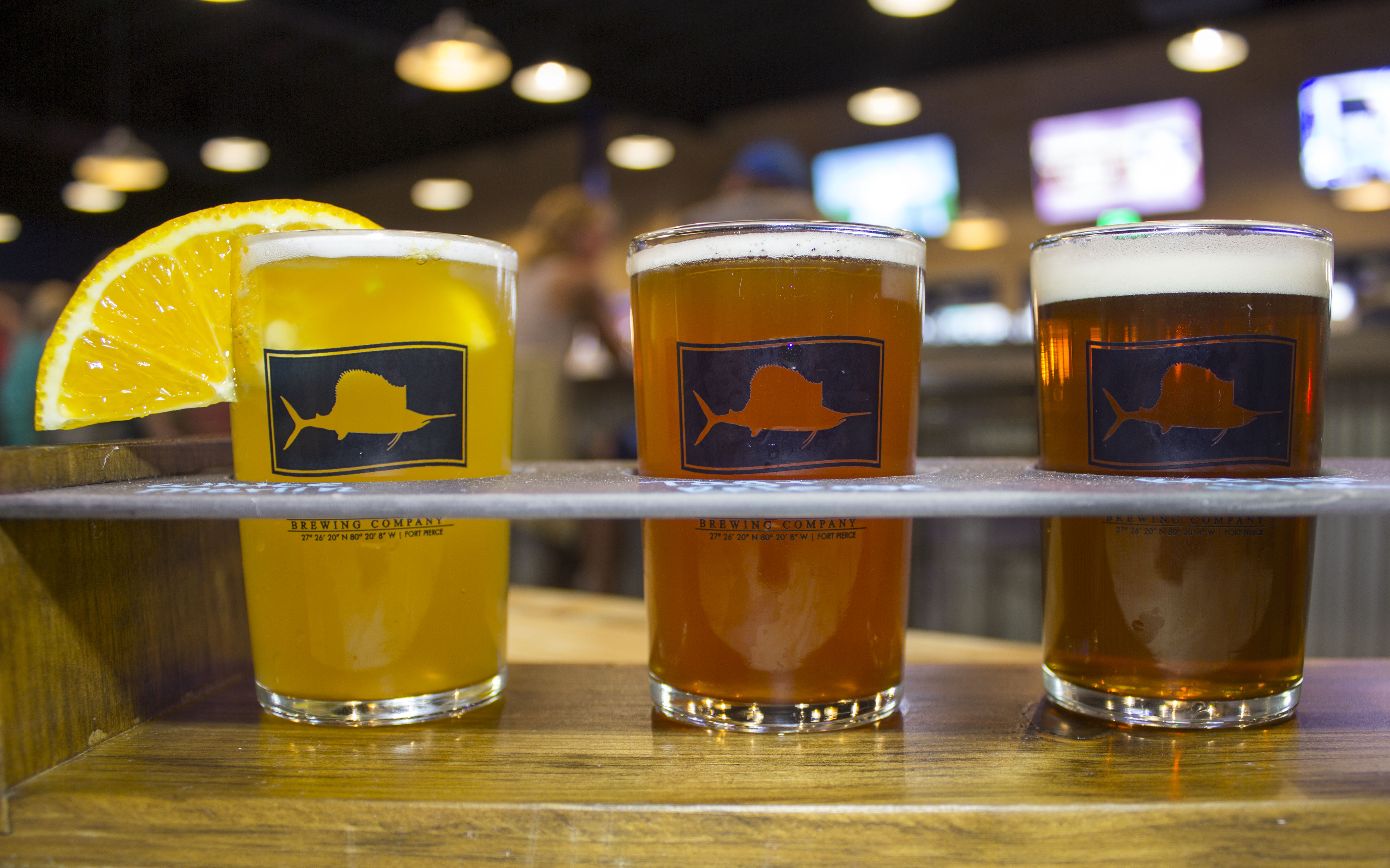 My next tasting experience takes me down to Fort Pierce to a brewery called Sailfish Brewing Company.  This brewery is the brainchild of co-owners Nick Bischoff and David BuShea Jr and has been around for four years as of May 2017.  They recently moved into their new location on 2nd Street in Fort Pierce which is much larger than their previous space to keep growing their business.  All beer is brewed, put into kegs, bottles, and cans at this new location and can accommodate a much larger crowd.  They have an outdoor patio and entertainment space for local bands or comedians, and a large bar and several tables inside.  The brew room is visible from the inside tap room via several large windows so you can watch them brew beer as you are tasting it.  We met with Al Beltran, General Manager and Head Brewmaster for our tour of the facility and the beers, so let’s jump right in.

We arrived on a Friday night and parking was definitely at a premium.  There is a large parking lot directly behind their building near the loading dock and it was quite full due to several other events going on the same night around the brewery.  We ended up circling the block and ended up finding a spot right off of 2nd street and had just a short walk to the brewery entrance.  They have some outdoor seating and a stage area with a large video screen right off 2nd street.  The band that was playing that night was setting up for their set later that evening.  We entered into the main tap room and they have a large rectangular bar with stools all around it.  Lots of staff were on hand to take care of the customers.  We grabbed a table and got settled in for our tasting experience. Now let’s dive right in and see what this place has to offer and what I had to drink! Comments below are starting from the left, making my way to the right.

Tasting Notes:  Aroma was subtle, light, crisp, an easy drinking beer.  It definitely had orange and citrus notes and is probably their closest to a mainstream beer, a real crowd pleaser.

Tasting Notes:  The aroma of the malt was subtle.  It was a medium bodied beer, definitely an easy drinking beer due to the low IBU’s.

Tasting Notes:  The aroma was undetectable, but had a subtle coffee flavor and was very smooth and creamy due to it being on nitro.  The flavors really came through as the beer warmed up and came to room temperature. Comments below are starting from the left, making my way to the right.

Tasting Notes:  The aroma and flavor was very hop forward, definitely has that bitter taste that is popular with IPA’s.  This is definitely an IPA for someone who is a “Hop Head”.

Tasting Notes:  The aroma was definitely bitter.  The flavor was mildly hoppy and definitely had that bitter taste that is popular with IPA’s.

Tasting Notes:  The aroma was slightly sweet and spicy.  The flavors were definitely fall inspired and were subtle.  An easy drinking beer that would be nice on a cool evening. Brew Kettles where each batch of beer begins! The orange mash is the beginnings of the White Marlin beer! If you get hungry while sipping on some pretty tasty brews, our friends from Taco Dive are just down the street and will deliver to your bar stool!  Menus are located throughout the brewery.

Out of all the brewery reviews I have done so far, I’m really impressed with the Sailfish offerings and especially with their Brewmaster, Al Beltran.  He spent a lot of time with us at our table and talked to us about the specifics of all the beers we were tasting.  Our good friends, Joe and April joined us for this review and Joe has traveled the country on business trips and sampled craft beers from over 200 different brewery’s nationwide and he said that Al was one of the most knowledgeable and passionate Brewmasters that he has come across yet.  If craft beers are something you are passionate about and you have not had a chance to try Sailfish yet, then I suggest you make the short drive down to Fort Pierce and check them out, I know you won’t be disappointed!

Have you tried Sailfish Brewing Company?  What has your experience been with them?  Sound off in the comments below and let me know your thoughts, or feel free to email me at thefoodguy@verovine.com with your questions or comments.

Follow Me
Thomas Miller
Thomas Miller, aka "The Food Guy" is big on organic everything and very particular about his butter. He has reviewed over 150+ local restaurants in the last 4 years and is invited by Disney to review the EPCOT International Food & Wine Festival every year. His food photos are devoured by 10's of thousands monthly on VeroVine.com and as a Google Maps Local Guide, his photos have been viewed over 16 million+ times. His foodie tribe is over 10,000+ people right here in Vero Beach and his VIP Foodie Dining Experiences are some of the Top Culinary experiences in Indian River County and beyond.
Follow Me
Latest posts by Thomas Miller (see all)
Subscribe
1 Comment
Oldest
Newest Most Voted
Inline Feedbacks
View all comments