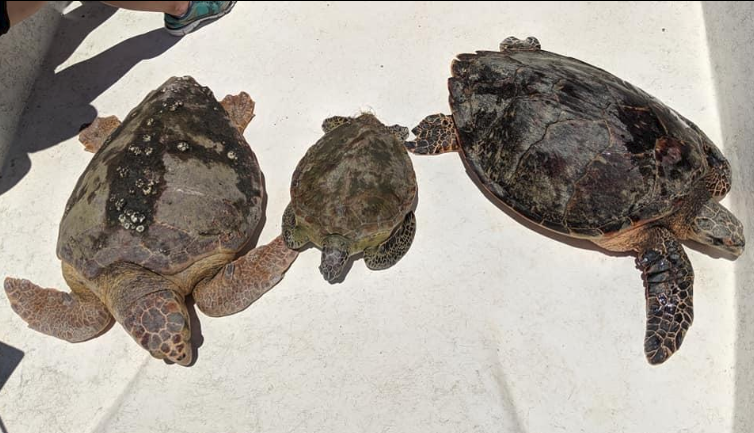 Florida sea turtle researchers have encountered one of the rarest of all sea turtles, far away from where the turtles usually are seen.

Sea turtle researchers working in the Indian River Lagoon have encountered one of the rarest of all sea turtles, far away from where the turtles are normally seen.

It’s only the second time that researchers with the University of Central Florida’s Marine Turtle Research Group have seen a hawksbill turtle in the lagoon during more than two decades of research.

On an exciting first day for a new group of interns, the researchers briefly captured the hawksbill in Brevard County while netting for a long-term federally permitted project.

She estimates they were about a mile south of the boat ramp at Sebastian Inlet State Park on the east side of the Lagoon.

“Hawksbills are the rarest of all sea turtles that nest in Florida,” Luciano Soares, one of the lead sea turtle biologists for the Florida Fish and Wildlife Conservation Commission, wrote in an email.

The majority of the hawksbills lay their nests in the Florida Keys, said Soares.

Only 54 nests have been documented since 1979, said Michelle Kerr, a spokeswoman for the commission. Over the past five years, seven nests have been recorded, six in the Keys and one in Palm Beach County.

The UCF research group monitors the populations of turtles that forage in the lagoon, as well as the sea turtles that nest along the beach in the Archie Carr National Wildlife Refuge.

This spring the group launched a new genetic research project with Mansfield and UCF biologist and genetics expert Eric Hoffman.

They hope to use the information about the genetic structure of the sea turtles to better understand the origin of the juvenile turtles that forage in the lagoon and how nesting populations are connected. The data could also help determine whether local foraging juveniles come from Florida nesting beaches or nesting beaches from afar.

This story originally published to news-journalonline.com, and was shared to other Florida newspapers in the GateHouse Media network.

Nikki Kalin
Nikki Kalin literally has the Treasure Coast, especially Vero Beach as her home and her office. Having grown up and educated in Indian River County Nikki works with a deep knowledge to tend Vero Vine with a continual reach into all the communities of the Treasure Coast. She is in the vineyard virtually every day. Following its growth, nurturing start-ups, longtime roots, and branches of businesses, non-profits, municipalities, and everyday people. Nikki makes certain Vero Vine is connected.

The “real world” is Vero Beach Marketing where Nikki was recruited and is being mentored by Creative Director/ Owner, Stacy Cook. Nikki’s daily efforts include website management, email marketing, newsletter development, and most notably social engagement. Nikki has been instrumental in the deployment for the last two years of the “VeroBeach Marketing Summit” coordinating scheduling for regional and local experts in the digital space. In 2018 Nikki was responsible for the Email Marketing break out session, presenting her experience and insights to an audience of local businesses and professionals.

All of this is on behalf of local business clients and Vero Vine contributors. Nikki curates the good news about events, philanthropic happenings, and all the adventures in the Paradise of Vero Beach and the Treasure Coast. Updating Vero Vine, Vero Beach Foodie, and all of their client’s websites and Socials Nikki Kalin makes sure that the world has everything on Vero Vine within reach.