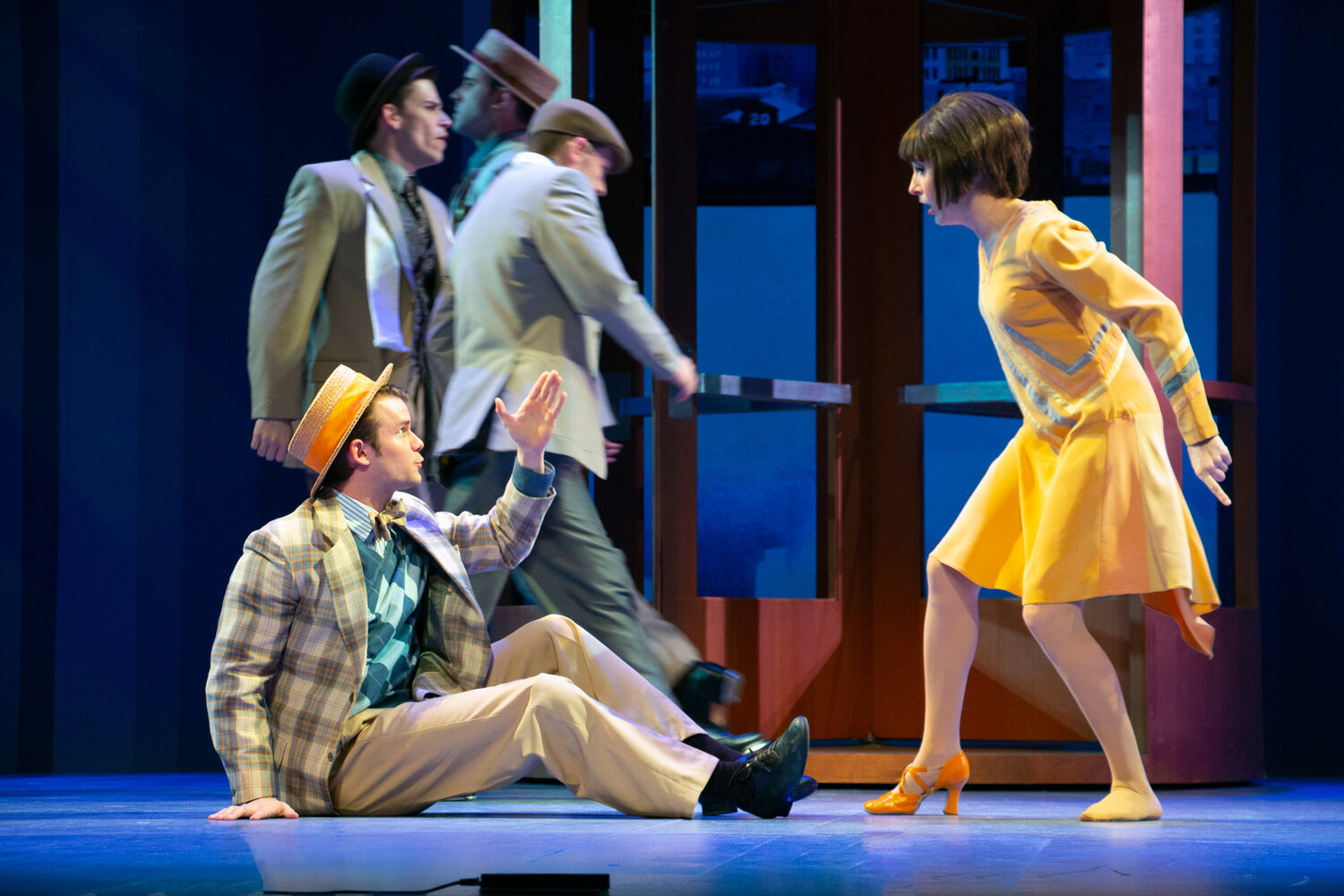 Heads turned, laughter overflowed, and a standing ovation was inevitable at Riverside Theatre’s production of ‘Thoroughly Modern Millie,’ sponsored primarily in part by Bill and Laura Frick and Judy and Bill Schneebeck.

If you’re familiar with the original ‘Millie,’ then you know the plot line all too well. A homely girl takes off to the land of the rich and famous – New York City – to make her dreams of becoming an actress a reality, working her way into the riches by actually working her way into a man’s heart. For Millie, that man was her boss, Trevor Graydon, the man in charge at ‘Sincere Trust.’ To Graydon (played by Matthew Hydzik), Millie was referred to as “John,” a quirky pet name given to her because of her ability to be quick and accurate as a stenographer, like “Johnny on the spot.”

However, Jimmy Smith, a supposed former paper clip salesman, was who Millie first encountered when she arrived to New York City from random Kansas city. Smith, played by Patrick Mobley, was on his way to a date (with a pretty little unnamed blonde), when Millie knocked him flat on his behind while on his walk, after she had been robbed of her hat, her scarf, her shoe, and her purse by an awful New Yorker.

Smith’s quick wit and lack of charm is a put-off for Millie Dillmount, however she accepts his direction about where a young woman might stay in her position. Millie finds herself at the Hotel Priscilla, a hotel that welcomes struggling young actresses and targets – yes, really – lonely orphan girls.

The seemingly Chinese Mrs. Meers, played by Adinah Alexander, disguises herself as a caring and affectionate hotel concierge, all the while her true identity, Butterfly, as she calls herself, is selling orphan girls to a man named Buddha, who pays cash to Mrs. Meers through her two hotel workers, Ching Ho and Bun Foo, and then ships the chloroformed young ladies over to Hong Kong. There, they are doomed to become victims of ‘White Slavery,’ which one might assume to be the equivalent of modern day sex trafficking.

The comedic yet sultry musical is a moment-by-moment change of events that the audience can’t help but adore and keep up with, and the endless toe-tapping performances certainly add to the upbeat nature of it all.

Before long, the anticipation of which woman will fall for which man and which will fall victim to Mrs. Meers’ agenda keeps the audience on the edge of their seats.

Scenes in which the performers paired together and engaged in singing were jaw-dropping, as their voices blended gorgeously together even when they were singing two different verses in a combined song. The first instance of this was when Millie met Miss Dorothy Brown, an orphan from California who was willing to be Millie’s roommate and ‘see how the other half lives,’ first met in the lobby of The Priscilla.

Miss Dorothy Brown, played by Victoria Britt, is a long-haired blonde girl who quickly becomes Mrs. Meers target for white slavery. The workers, Ching and Bun, however, see Dorothy as a beautiful woman and are hesitant to chloroform her and play along with the slavery scheme that was knowingly in the works.

Chance encounters between Jimmy Smith and Millie Dillmount reoccur, including one where famous singer and actress Muzzy Van Hossmere is hosting a gathering where Jimmy introduces Millie and Miss Dorothy to the fabulous Muzzy Van H. Shortly after that introduction and a bit of a disastrous soiree (disastrous, thanks to a false home remedy for ridding a stain, unintentionally suggested by Mrs. Meers), the two engage in a passionate kiss before Jimmy rushes off and leaves Millie speechless (although of course not songless), and she briefly forgets all about her future husband of a boss, Mr. Graydon. Her romantic infatuation is quickly cut off when she returns to The Priscilla to hear Jimmy leaving Miss Dorothy’s living quarters and gives Millie’s newfound bestie a kiss on the cheek, thanking her for being there for him. There, however, in the sense from Millie’s eyes that led her to believe he was there for intimate reasons when in fact, he was there to talk to Miss Dorothy about his mixed feelings surrounding the enticing and bold Millie Dillmount.

As Millie redirects her focus back toward Mr. Graydon, a new light is shone on the orphan from California in Graydon’s eyes, when she comes to see Millie at work one day at Sincere Trust. Before she realizes it, Graydon has shifted his eyes from Millie and now onto Miss Dorothy, and has his proposal hopes geared in her direction, leaving Millie in bewilderment at what had transpired before her very eyes.

Realizations start to fall in place surrounding the true identities (and shocking mysteries, in a way) of Jimmy Smith, Miss Dorothy Brown, their relation to Muzzy Van “H,” and an all-encompassing plan to pursue and then frame the slimy Mrs. Meers and her illegal white slavery dealings. In the end, every character belongs with the man or woman they are destined to be with, including a man who is just right, in his own way, for the pompous Mr. Graydon.

Other mention-worthy performances in Riverside Theatre’s production of ‘Thoroughly Modern Millie’ include that of actress Natalia Lepore Hagan as the vivacious and uppity Miss Flannery, the office supervisor over stenogs at Sincere Trust, and Anthony Chan and Carl Hsu, who play brothers Ching Ho and Bun Foo, who long to see their mother in Hong Kong, whom Mrs. Meers is holding over their head to make them do her dirty deeds.

The modern musical – winner of six Tony Awards – is based on the 1967 film starring Julie Andrews and Mary Tyler Moore, which stems from the book by Richard Morris and Dick Scanlan, with new music by Jeanine Tesori and Dick Scanlan.

There are still a handful chances to see the show at Riverside Theatre and tickets and seating information can be found HERE.

Jennifer Stockdale
I’m a freelancing Floridian mama. I currently reside in Vero Beach, where I blog, paint, edit, write, and mom. I believe that acceptance, empathy, and compassion are the key to a well - lived life.
​
I earned my bachelor's degree in journalism from the University of Central Florida, and my bachelor's in nursing from Armstrong Atlantic State University in Savannah, GA. I certainly embrace my experience as a nurse (and have experience as a firefighter and EMT as well), however my passion has always been in the field of journalism. I thoroughly enjoy writing and making words come to life. ​
​
When I'm not behind a computer screen typing or in front of a canvas painting, you can usually find me somewhere near the water with my two kids and my husky, Skye (who also blogs and has her own YouTube). ​
​
I think small businesses that are locally-owned and operated are far under appreciated so I support and recommend them whenever I can. ​
​
Oh, and I am fueled by sunshine, coffee, and pixie dust.